Template:Character BoxMichael was a friend of Alan Partridge. He made numerous appearances on I'm Alan Partridge as an employee at Linton Travel Tavern, and then as a retail worker at a fuel station.

Michael is from Newcastle, and his strong Geordie accent is a source of much confusion for Alan. For some time, he worked in the military, where he travelled to a wide range of places including Manilla, Hong Kong, Bangkok and Belize. He became friends with Alan during the latter's 183-night stay at the Linton Travel Tavern, when Michael worked there in an unspecified capacity, but apparently as a general handyman. A few years later, Michael became an assistant at a BP fuel station, which Alan frequently visited. Michael married a Thai woman, who lived in Sunderland with his brother.

Michael was hired as a security guard at North Norfolk Digital. He was last seen jumping off Cromer Pier and was confirmed to be missing by Alan in his book, Nomad.

Like Partridge, Michael has a neurotic personality and tends to make social faux pas, albeit less embarrassing ones. Despite appearing relatively harmless and kindhearted, Michael is prone to well-meaning but highly inappropriate displays of machismo. His experiences as a soldier have undoubtedly exacerbated his disturbed personality, which is evidenced by him tearing at his hair behind the Travel Tavern and his fantasy description of how he would machine-gun a "mate" to death from a helicopter and then fly into the sea. Reduced to menial jobs, he is chipper and eager to fulfil his employment duties. In private, and when drunk, Michael is angry and despairing of his life. Arguably, he is acutely aware of his deficient intellect.

Michael does, however, have four friends who regularly visit the petrol station to chat to him, including Alan Partridge and Tex. Alan temporarily renounced their friendship and stopped visiting the BP garage when he discovered Michael's friendship with Tex. Alan is simultaneously patronising towards Michael and in awkward awe of his hard-as-nails working-class background and military experiences. 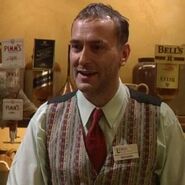