Knowing Me, Knowing You

Alan Partridge hosts a Yuletide special edition of his chat show from a mock-up of his living room. After introducing the guests, Alan sits down with new BBC Chief Commissioning Editor Tony Hayers and asks repeatedly for a second series of Knowing Me, Knowing You. Rover salesman Mike Taylor arrives dressed as Father Christmas, and he and Partridge have a protacted discussion about the specifications of the Rover Vitesse Fastback to advertise the model. Alan plays a video entitled "Christmas in Norwich with Alan Partridge", where he describes his life in his home city. Hayers discusses the ethics of product placement, considering it a "severe breach of contract" as "Father Christmas" gifts him a toy Rover. Partridge invites golfing couple Gordon and Liz Heron to what appears to be a mock-up drawing room for a classic chat show segment, then introduces the "biggest Christmas cracker in the world", built by White City Pyrotechnics, containing a kidney dialysis machine bound for Norwich Children's Hospital. When the Royal Plymouth Sea Cadets attempt to pull the cracker, it catches fire, rendering the "largest Christmas cracker" record unbroken. Alan reveals that the dialysis machine has to be sent back to the suppliers, then performs a rendition of The Twelve Days of Christmas with the abandoned Christmas cracker prop still in the middle of the set. With two turle doves suspended in the air above the cracker, he cancels the musical number. On-set entertainer/chef Fanny Thomas instructs Partridge to stuff a roast turkey whilst making a series of relentless innuendos. Gordon makes fun of him, and, in retaliation, Alan punches him and Tony in the face with the turkey still on his hand. Hayers proclaims to Partridge: "I'm going to make sure you never, never work on television again". 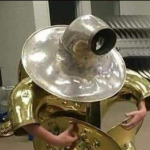