Knowing Me, Knowing You (radio series)

Knowing Me, Knowing You

"In these six hysterically excruciating episodes, Alan faces up to a child prodigy, proves his phobias with a lady hypnotist and argues with a young bad-boy lawyer. He meets a former hostage, a showbiz cockney and France's second-best racing driver; welcomes a Duchess, an impressionist and a junior minister; and is live from Las Vegas with a professional gambler. But attempts to gain favour with BBCTV's comissiong director don't go too well, and an interview with a maverick Lord ends on a bombshell when he dies mid-anecdote on Alan's sofa." (BBC Studios)

Knowing Me, Knowing You with Alan Partridge

Knowing Knowing Me, Knowing You 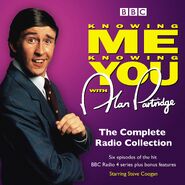